Who are the Wends?

Wends (also called Sorbs) are a Slavic people living in Lusatia, a region in Eastern Germany. Bilingual in Wendish and German, Wends have their own distinctive culture and customs. 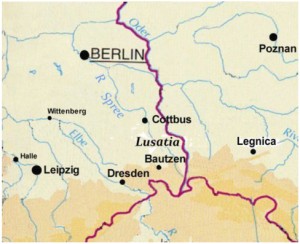 Why did the Wends Emigrate?

Wends had been economically and politically repressed for centuries. In the mid-1800s a number migrated to other countries due to:

The first Wendish families arrived in 1848 on the ship Victoria. Over the next 12 years, 400 other families joined them. Many lived briefly at Klemzig or Hope Valley before settling east of Gawler at Rosedale and in the Barossa Valley at Ebenezer, Neukirch and St Kitts. Others headed north to Peters Hill, near Riverton.

Some Wends later moved from South Australia to Victoria (Western Districts, near Hamilton, and the Wimmera, near Horsham) and to New South Wales (Riverina, north of Albury).

The Wends were devoutly religious people. At first they continued to worship in the Wendish language using Wendish Bibles, hymn books, sermon books and devotion books which they had brought with them.

As Wendish settlers spread out they found themselves in a minority, and so intermarried and assimilated with the larger German population. Within two generations most of the Wendish language and culture had been abandoned in Australia.

The Wendish Pioneer Heritage Trail has interpretive signs at the following Wendish settlements in South Australia: 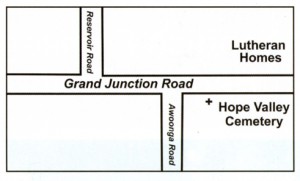 The Hope Valley sign has been erected in the Hope Valley Cemetery at 1184 Grand Junction Road (south side), about 100m east of the intersection with Awoonga Road, and alongside the Early Learning Centre. 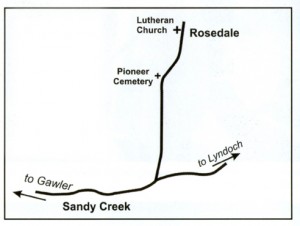 To get to Rosedale: From Gawler take the road to Lyndoch. 1km past Sandy Creek, turn left for Rosedale, which is 5km to the north. The Wendish Pioneer Heritage Trail sign has been erected at the Lutheran church. The Pioneer Cemetery is 2km south of Rosedale at 327 Rosedale Rd. 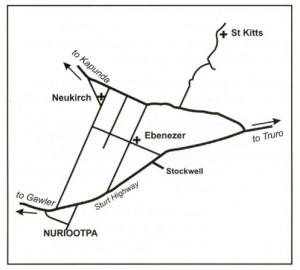 To get to Ebenezer: Take the Sturt Highway (A20) towards Truro. After the sign for Nuriootpa watch for the Stockwell sign and shortly turn left onto Ebenezer Road. After 2km you reach the Ebenezer church on the right; the Ebenezer Wendish Pioneer Heritage Trail sign is at the corner of Ebenezer and Research Roads in front of the old school building.

To get to Neukirch: From Ebenezer keep going westward on Ebenezer Road. It is now an unsealed road. When you meet the bitumen road, turn right towards Kapunda. After 1km you reach the Neukirch church with the Wendish Pioneer Heritage Trail sign at the front. You can return to Nuriootpa by going southwards along the bitumen road (Belvidere Road) to the highway.

To get to St Kitts: From Neukirch continue northward to the Kapunda–Truro road. Turn right and after 4 km turn left at the St Kitts West Road sign. Follow the signs to St Kitts. This is an unsealed road. The Wendish Pioneer Heritage Trail sign has been erected at the entrance to the cemetery of the former St Petri Lutheran Church. 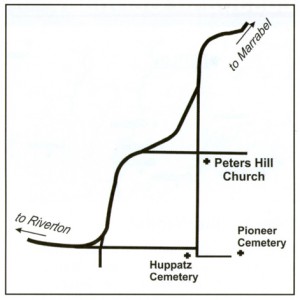 The Peters Hill area is east of Riverton. Take the road to Marrabel. It is first a bitumen road and then an unsealed road. After 7km, turn right to Peters Hill. The Wendish Pioneer Heritage Trail sign is located near the church at the next intersection at 99 Huppatz Rd.

The Huppatz family cemetery and the Pioneer Cemetery are situated over 1km south of the church, via a dry weather track. 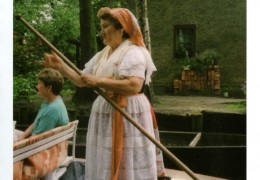