As humans formed into families, tribes and nations, various social customs, legends and beliefs arose and were maintained. For the Wends, these have included both traditional slavic/wendish and, later, Christian beliefs and customs. Much of this material was investigated and recorded by curious journalists in the Nineteenth century. 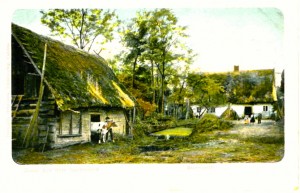 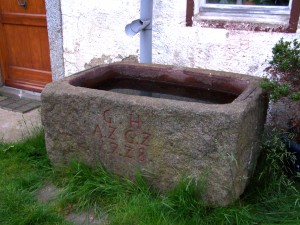 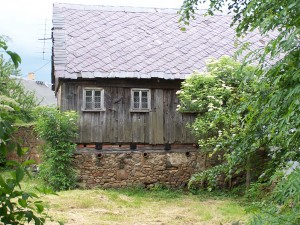 The houses of wendish farmers were commonly made of logs roughly hewn into shape, the chinks filled with mud and the surface rudely whitened with plaster. The roof was thatched with heavy reeds and straw and one room generally served all purposes. 1

Food has always been essential for living so the Wends spent much of their time growing and storing corn, keeping herds of cattle, brewing their drinks, growing fruit and caring for sheep.

A typical list of wendish foods would have included “Pellkartoffeln”, which is a potato dish, bacon, ham, sausages, sauerkraut which is pickled cabbage, sauergurken which is pickled cucumber, milk, honey, butter, koch-kaese and quark which is home-made cheese, bread and streusel kuchen. 2 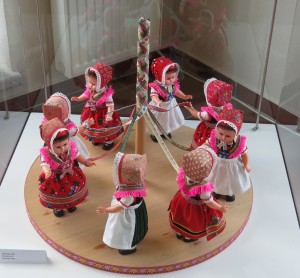 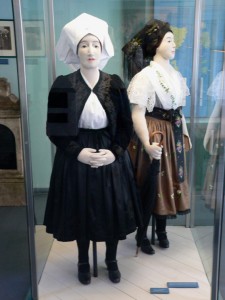 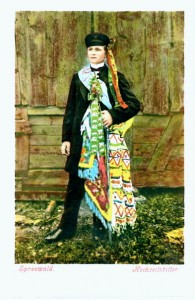 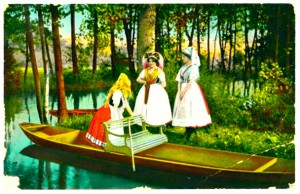 Boating on the Spreewald 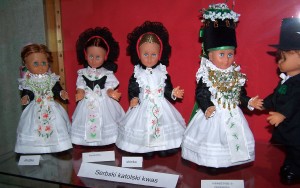 The clothing was a unique feature of Lower Lusatia, especially the large, horned head-dress worn by the women.

In the field, they wore wooden shoes and knee length dresses. It has been observed that wendish women were reluctant to expose their hair to the general gaze and therefore liked to keep their heads covered. 3

Names for children in large families were rather systematically given in some areas. For example, in a village called Schleifa, boys in the family were named in the following order: Hanzo (Johann), Matthes (Matthew or Matthias), Juro (George), Kito (Christian), Merten (Martin) and Lobo (Gottlieb) whereas the order for the girls was Maria, Anna, Madlena (Magdalena), Lisa (Elizabeth), Krysta (Christiane), Wortija and Worsula. 4

The Spreewald has over the years been considered a wendish domain. It is really a complex web or labyrinth of Sprees, or small natural and man-made channels, which break the land up into islands and require transportation by boat. There is not much wood left but a row of trees generally borders the river channels.

The legendary occupation of it by Wends goes back to a wendish chieftain called Prebislav, who in the tenth century escaped from a battle in Upper Lusatia near the Upper Spree by making a raft of bushes and straws and by floating down the Spree to the site of Burg. Here he built a shelter and later a castle. It is still known as Burgberg and graves of wendish kings have been located there. 5

The Spree channels are generally shallow and the boats are pushed along with a stick or pole from the rear of the barge. 6 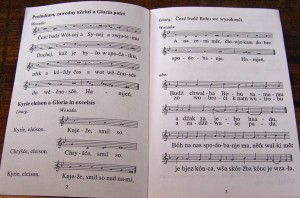 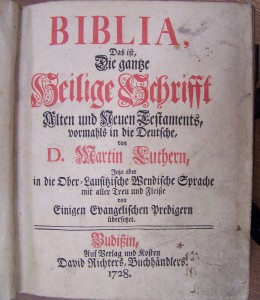 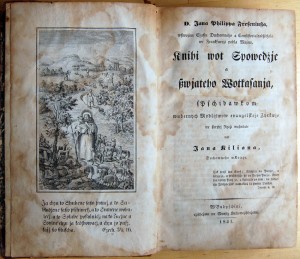 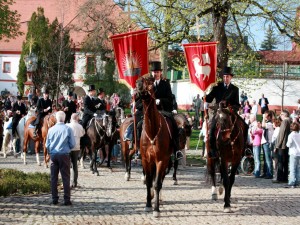 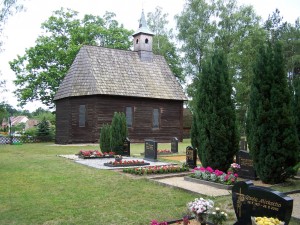 The baptism of infants was considered to be vital for the saving of the baby’s soul and to prevent the baby from becoming a will-o-the-wisp. Additional customs accompanied this Christian ritual. For example, two godmothers were required and the older one carried the child to church while the younger one brought it back home. 7

At the doorstep, she needed to step over an axe and hoe or a broom and spinning wheel, depending on whether the baby was a boy or a girl. Such a ritual was intended to bring good luck.

Inside the home, the godmother opened a hymn book at random and used the hymn which appeared to predict the child’s prospects for life. It was considered important not to leave the baby alone; even a bird or animal was enough to baffle the spirits. 8

The wendish wedding especially among the peasants consisted of seven parts: the engagement, invitation, preparation, fetching the bride, bridal procession to and from the church, the wedding banquet and finally capping the bride. The traditional colour of the gown was black.

The ritual courting was supervised by the best man, during which an old dressed-up hag emerged from the house instead of the prospective bride. When the bride eventually appeared, the couple stood together and turned around three times.

At the ceremony, both bride and groom were required to have money in their shoes. 9

The religious rite in church was followed by the bridal dance performed in front of the church-yard. Then, in the bride’s home, a jug of milk was drunk and smashed and the bride visited the stable to conciliate the cattle and enable her to become a good milker. 10 She was also not allowed to visit her parents’ house for four weeks. 11

Easter-time provided the Wends with an opportunity to decorate coloured eggs by scratching patterns on them. 13

Christmas involved a fast on the 24th December but when the first star appeared, the people assembled for supper consisting of nine courses.

The housewives baked special pastries and at midnight, it was thought that domestic animals could obtain the power of human speech.

In regard to wendish legends and tales, the Waterman or Wassermann was the most popular of the mythical creatures. He was considered to be a small, grey, hideous creature with long, green hair and claws which lived in the depths of the rivers and ponds. It was believed that he could disguise himself as a human being and each year drowned at least one person. On the other hand, he could also be very generous. 14

The Magician Krabat may have been based on an historical person, the Croat officer Jan Schadowitz, who had been given land by the Saxon Elector August the Strong (1670-1733) in return for opposing the Turks. Known popularly as Krabat, he was endowed with magical powers and could make the land fruitful and could free serfs. 15

The Sandman was alive and well in Lower Lusatia. A tired boy was thought to be attacked by Hermann and a drowsy girl at her spinning wheel by Dremotka. 16

The Graben or Draben were a race of supernatural beings which in their legends were friendly with the water-nixy, but not with mankind. They persecuted girls and liked to eat the peasants’ horses. They were thought to live in caves, to be very strong and to sometimes assume the form of a man. 17

Out in the fields, a ragged female demon called Pshespolniza liked to cut off the heads of reapers who did not rest for an hour at midday. 18 No doubt, this figure was a personification of sunstroke.

There was also a widespread belief in the existence and power of witches who could become disembodied souls and change into various shapes and forms. Such witchcraft or white magic was common throughout Europe, including England. It was widely believed that the science of witchcraft was contained in the sixth and seventh Books of Moses. These also appeared in Saxony as a talisman of the Saxon House of Wettin and they were thought to have vanished in a semi-miraculous manner. 19

Our library and research centre in Box Hill South, (Melbourne), Australia, is open by appointment. Contact Us if you would like to arrange a visit.